The Legend of Rockabye Point

I don't know why, but I've been watching Chilly Willy cartoons lately. And of course, the best were the two directed by the man who designed his current look, the greatest cartoonist that ever lived, Tex Avery.

I find it odd that not a lot of people mention his post MGM stuff, but maybe that's because he didn't last too long in the business after Walter Lantz's studio. It sucks that he had a crap contract with them, because I could see him make one friggin' awesome Woody Woodpecker cartoon!

Anyway, this is my personal favorite during Tex's short 4-cartoon stay at Lantz's studio. Even though Avery kept saying he felt burnt out by this point, this shows that he still had the magic touch he's had since his early WB days. And goddamn, is it hilarious!

I feel bad that I can't distinguish who animated what scenes, but it's still well animated.

Posted by Unknown at Tuesday, November 29, 2011 No comments:

Another Avery cartoon that gets overlooked a lot, in my opinion. It makes a good Halloween cartoon since it can be interpreted as a psychological horror, like in 1959's The Haunting. (Of course from the cat's point of view. That's a great design, by the way!) There's a lot of neat backgrounds in this one and  some of Grant Simmons' finest animation. I'm pretty sure he did that great scene where the bird shoots himself with a finger-gun. Cracks me up every time. Below are some model sheets from Kevin Langley's great site and a restored version of the cartoon. Happy belated Halloween! 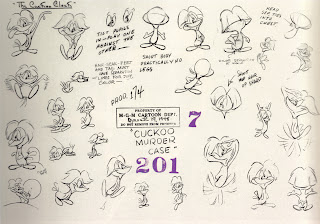 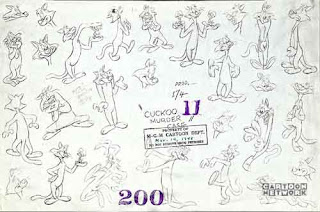 Posted by Unknown at Tuesday, November 01, 2011 No comments: